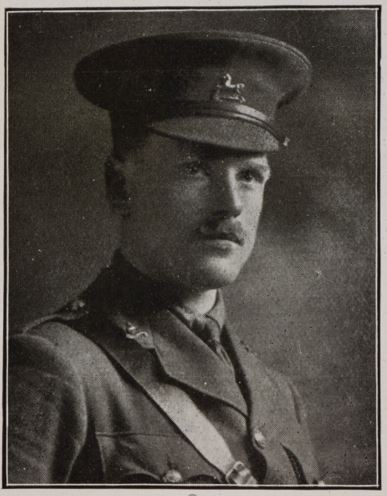 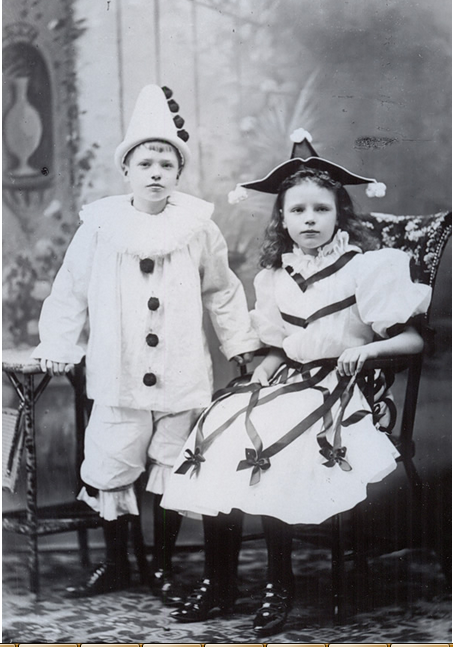 William was the third of four children of Henry and Mary Ormesher of Stockport, Cheshire. William (or, as is very likely according to the prevailing custom, “Bill”) Ormesher was born on 14th October 1887. His was by local standards from a secure lower middle-class upbringing. Henry was listed in the 1901 census as a ‘Carrier’ the formal term for Furniture Removers. The firm of T Ormesher and sons was the largest removals firm in the area. William attended the local primary school but won a scholarship to Stockport Grammar School at the age of 11. 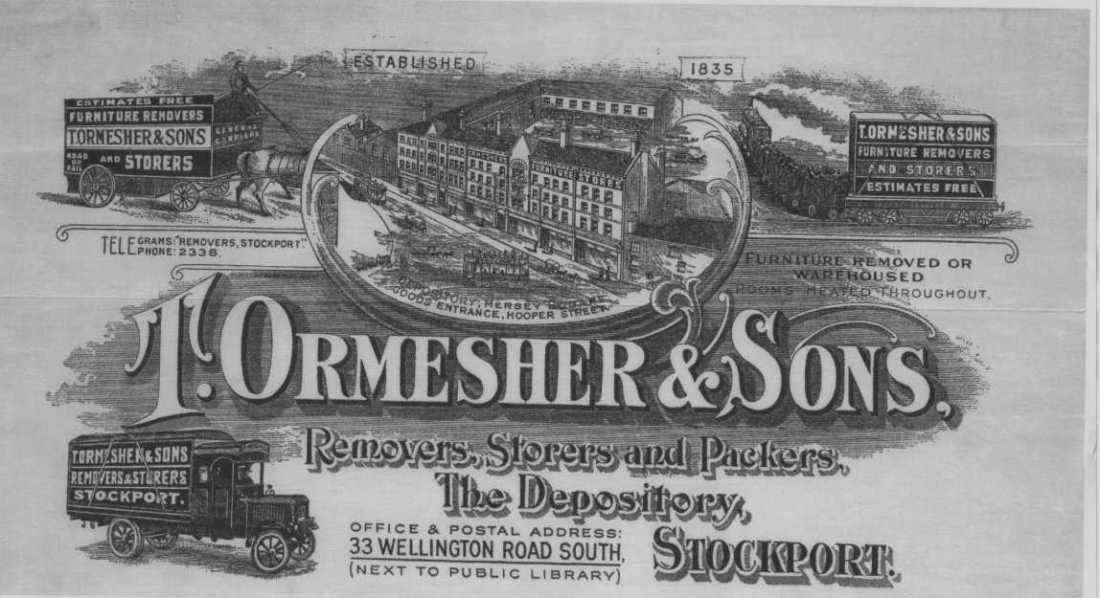 As was usual at the time, formal photographs provided a symbol of a family’s success to the outside world.

For many families, children dressed in sailor suits would be considered formal, dressing them up as Pierrot clowns was just a little less so but still dressy enough for keepsake purposes.

William did well at Grammar School and went on to study at Manchester University. As was common at the time he spent much of his spare time with Manchester University Officer Training Corps. (UOTC) Bill graduated in 1907 and was awarded an MA the next year. His university records show from the List of Courses, for 1906-7 that he attended the Day Training College [teacher training], and studied Greek, Latin, French and Education for an Ordinary B.A.

In 1907-8 he studied Greek and Latin for an M.A. The Register of Graduates records that he was also awarded a 1st Class Teaching Diploma, in 1908. His first teaching post was at Lancashire Hill Council School in his native Stockport for the 1908/9 school year.

Thus, he arrived at his second teaching job at Blandford Secondary School in September 1909.

Whilst Bill is shown by the 1911 census as living in ‘Kings Road Pimperne’, this is the Kings Road that turns off Salisbury Road in Blandford. Until the 1920’s the rural parishes surrounding Blandford had boundaries to within a half mile radius of central Blandford. Bill didn’t stay long at Blandford School, only two school years. By 1914 he had also taught at Leytonstone Grammar School in East London and had moved on Bridgnorth Grammar School in Shropshire.

By looking at his military record held at the National Archives in Kew, we can see that he served with the University Company of 2nd Volunteer Battalion the Manchester Regiment from 1905 to 1908 (what today is Manchester UOTC) and was commissioned into the Kings Liverpool Regiment on 4th Dec 1914.

His medical records show that his first examination was on the 7th Sept 1914, just over a month after the war started, so that firmly places him as a K1 – one of Kitchener’s first 100,000 recruits. His actual date of enlistment was on the 10th September.

Men applying for Commissions in Kitchener’s New Army had to complete either a pink MT392 form or a blue MT393 form. The pink form showed that a candidate was either from an approved public school or had served in a UOTC – thus fulfilling the Edwardian ideal of the Gentleman Officer. The blue form was used for those who might be considered for a commission but didn’t fulfil either of the two usual criteria.

Bill’s record has a pink MT392 form, though he ‘blots his copy book’ slightly by admitting that he cannot ride at the bottom.

Bill was sent immediately to the School of Military Instruction at Freshfield near Formby in Lancashire for a month in February 1915 as a 2nd Lieutenant in the 16th Bn King’s Regt. In May 1915 he leaves the King’s to be posted to 2nd Bn Royal Fusiliers.

The Royal Fusiliers would go on to recruit 76 different battalions in the Great War. Bill’s Bn was the 2nd/1st. In other words, he went to the first of the many battalions raised from the pre-war nucleus of the 2nd Bn RF.

The battalion history shows them going into action on 25th of April 1915. Gallipoli was a very hot place during the summer months when sanitation, difficult enough in trenches in France, got completely out of hand in Turkey. Bill arrived in Gallipoli at the beginning of July 1915. However much one associates ‘Gallipoli’ with heat, flies and poor hygiene, the actual conditions the British soldiers suffered changed wildly as the year went on.

Conditions for the troops were horrendous. As well as the obvious dangers from the enemy, disease and unsanitary conditions had to be contended with and many men fell ill. In the middle of August, William had to be evacuated to hospital in Cyprus suffering with debility and dysentery. Around the same time, he received news that he had been promoted to Lieutenant in recognition for work in supervising the repair of a trench whilst under heavy fire. After release from hospital, he spent some time at the depot (probably on the nearby Greek island of Lemnos). In his last letter home, he told the family that he had met Lord Kitchener who had been on a tour of inspection.

The regimental history of the Fusiliers puts the situation of November 26th 1915 into awful context: “The sky grew dark, and suddenly the rain fell in torrents. The trenches were flooded quickly and became rivers. Everyone was soaked to the skin. This rain was followed by sleet, and later the wind changed and became a northerly gale with frost.”

The next morning, the trenches were still deep in mud and only offering four or five feet of protection. “The truce had ended as strangely as it had begun and anyone showing above the trenches was liable to meet the familiar fate. Captain Shaw was shot dead, Lt Ormesher was mortally wounded and with such object lessons the bitter discomforts of the trenches were made to seem preferable.”

Bill was shot through the abdomen whilst frantically trying to exert his men to throw up whatever earthworks they could after they had been washed away by the storm. Evacuated to the beach he was transferred to the Hospital Ship.

William had been wounded in the abdomen and was taken to a field hospital near the beachhead and then to the port of Mudros on the island of Lemnos. There he is understood to have received further treatment. Abdomen wounds were extremely serious in those days and chances of survival were low. However, his condition was stabilised, and he was boarded onto the Hospital Ship Dunluce Castle” on his way to the fuller medical facilities at Malta. However, he died during the journey and was buried at sea. 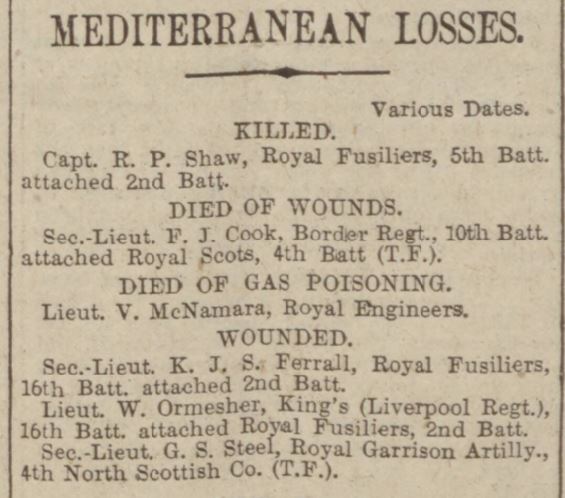 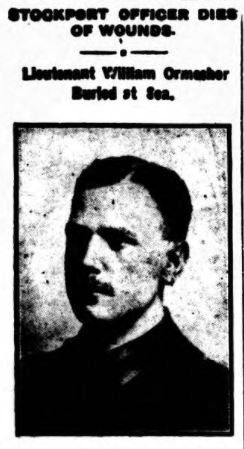 William had left only a few personal effects – a cigarette case, cheque book and some letters. These were parcelled up to be sent back to his family, but they never reached Britain. They were on board the SS Persia – a civilian passenger ship which was torpedoed on 30 December 1915 with the loss of 343 lives. Buried at sea, Bill was commemorated on the Helles Memorial in Turkey, in the Stockport War Memorial Gallery, at The Blandford School and both at Bridgnorth Grammar School and Bridgnorth Town Memorial.