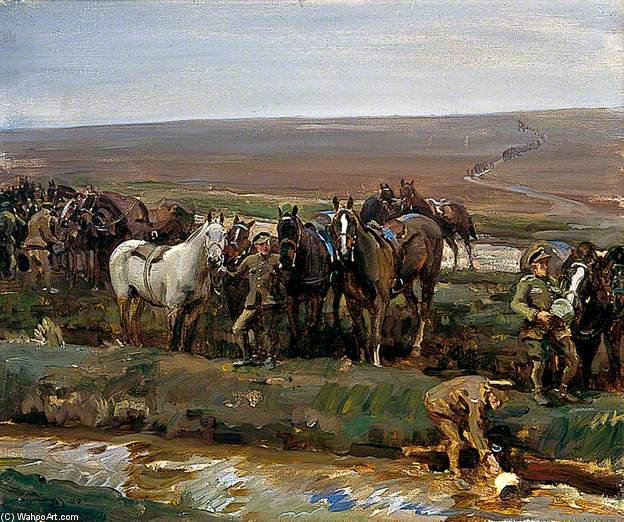 Sydney was born on the 30th August 1886 in Maidenhead Berkshire. He was the third of the six sons of Edward Ferdinand Broadbent, a Print Compositor, and his first wife Jennie. Unusually Sydney did not grow up with his parents but instead came to live in Blandford. He lived with two of his Father’s sisters: his Aunt Sarah; married to John Millard a Post Office Telegraphist, and his Aunt Florence who lived with the Millards. The Millards lived first in Orchard Street (No 60) and later Park Road (No 7).Whilst this may seem an odd arrangement, the practice of distributing children across extended families to childless couples was relatively common at the time.
Sydney is the oldest of all the men commemorated on the school War Memorial and the only Cavalryman. He would have attended Blandford Secondary School sometime between about 1895 and 1901. About that time the school had just over 100 pupils with boys and girls in roughly the same proportion. According to the 1909 school report only about 5% of pupils had parents in ‘Public Service’ like the Millards – the great majority being either Farmers or Local Businessmen.
Sydney shows up in Blandford in both the 1891 and 1901 census returns. In 1891 he is listed as a ‘visitor’ but in both he is listed as a ‘Scholar’. In 1901 Sydney is 15 and living permanently with the Millards and this is the year he probably left school. As both his Uncle John and Aunt Florence were working as Post Office Clerks and Telegraphists it is perhaps unsurprising that Sydney learned to operate a telegraph.
Sydney gained employment with the Post Office in Blandford as a Sorting Clerk and Telegraphist in early 1903 aged 16. His Uncle John had been employed in that role for 17 years at that point. This experience gave Sydney the opportunity to travel for work around the country. In 1907 aged 21 he was an ‘SC&T’ in Wokingham, two years later he was working in the same role in Camberley.
It is worthwhile to stop and think that, at a time when few people travelled far from their home town and that newspapers mainly concerned themselves with domestic news, Telegraphists were the one group of people who spent their days regularly connected to the wider world. When Telegraph traffic was slow it was quite normal for operators physically remote from each other to ‘chat’ in Morse code. Thus even if Sydney didn’t actually send transatlantic messages he would regularly chat to people who did.
The only other information we have on Sydney for his time in Blandford is that he spent three years training with ‘C’ Squadron of the Queen’s Own Dorset Yeomanry – the Cavalry component of what became in 1906 the Territorial Army – which was based in Damory Street.
In the early years of the 20th century Canada was rapidly expanding and calling for emigrants to come and help build the burgeoning agricultural economy. Indeed this advertisement in the Western Daily Press from July 1902 is typical. In fact it was possible to buy a single inclusive ticket from stations on the Somerset and Dorset railway all the way to Canada.
Sydney emigrated to Canada aboard the Allan Line’s SS Corsican from Liverpool, arriving at Quebec on the 23rd June 1910. Aged 24 his destination was given as Chatham Ontario, with the expressed intention of working on a Farm. He declared on the ship’s passenger list that he had a year’s experience of farming* and had $25 in his pocket. (This may not sound much but equates to about $2-4000 today**). Chatham is nearly 700 miles away from Quebec on the northern shores of Lake Erie. (Indeed it is only 50 or so miles from Detroit, Michigan in the USA.) It is here then that Sydney intended to make a new life.
That is until just over four years later when war was declared at home.

Britain declared was on Germany on the 4th August 1914. As a Dominion of the British Empire Canada was automatically brought into the war on Britain’s side, however it was up to the Dominion Government to decide the level of involvement Canada would have. Instead of embodying the Militia it was decided on the 5th August to raise a Canadian Expeditionary Force (CEF) instead.
Canada’s regular army in 1914 was only 3,000 strong and yet Canada eventually recruited the CEF to be 600,000 strong. Canadian recruitment was a parallel problem to Kitchener’s situation in Britain yet dissimilar in certain crucial ways. When Kitchener’s recruits found themselves in a training camp it was often only with a handful of experienced officers aided by whatever NCO instructors could be found. Sydney’s experience when he joined Lord Strathcona’s Horse (Loyal Canadians) could not have been more different. Indeed across the CEF there were plenty of ex-soldiers who had emigrated after leaving the army giving the CEF a far greater proportion of experienced NCO’s than most Kitchener Battalions.
A little more than a month after war was declared Sydney was at Valcartier Camp 25 miles north of Quebec. A hastily erected tented camp, Sydney and the Strathcona’s would not be there for long.
The regiment arrived on the 19th August – the first to arrive, and a further 300 men were absorbed into the ranks under the command of Lt Col A C MacDonnell.
Sydney was attested (sworn in) after a medical on the 20th September 1914. His medical shows him to be 5’6” tall weighing 10 stone with brown hair and brown eyes. After coming to Canada declaring an intention to work in farming, Sydney gives his occupation as ‘Telegraphist’. The nominal roll for the entire regiment on embodiment survives and a closer inspection tells us a lot about who these ‘Canadian’ soldiers were.
Just analysing Sydney’s sub unit, ‘C’ Squadron, and looking at the backgrounds of the 149 ‘Other Ranks’ compared by:
Country of birth
65% (97 men) were born in the UK

Whilst, across the Regiment as a whole, just over 65% were born in the UK and just over a quarter in Canada, the rest came from across the globe. The nominal roll lists birthplaces as USA 4%; Australia 1%; India 1%; as well as New Zealand, South Africa, British West Indies, Trinidad, Malta, Arabia, Argentina, China, France, Italy and Switzerland.

Previous Military Experience:
Whilst Kitchener had thousands of untrained volunteers on his hands; those who declared previous military experience in the Strathcona’s outnumbered raw recruits 6:1.